Winner of the 2004 Stanzas Prize: Past Providence by Bob Watts 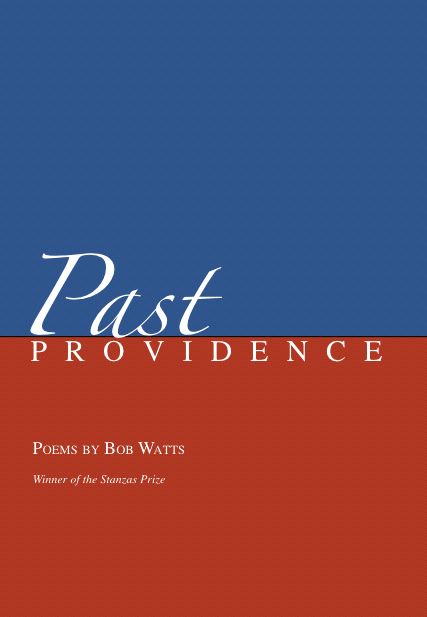 Bob Watts’ first collection, Past Providence, is a wise and tender look at the joys and catastrophes of love, rendered in a seductively formal minor key that displays the grace and effortlessness that only the hardest toil can bear up.

“The time will come when privileged readers can say, ‘Oh, I’ve loved Bob Watts’ poetry since I read his first book, Past Providence.’ A first book as accomplished as this is reason for one to rejoice at being present at the introduction of a poet whose stature and renown as one of our treasures is, I think, inevitable. Consider the absolute clarity of language within formal poems in which the forms are nearly invisible; consider the brilliance of such a poem as ‘A Poly-Grecian Urn:Wal-Mart, Easter Weekend, 1998’; consider the clever and reverent marriage of the sacred and worldly in ‘Another Supper’; or the inspired reinterpretation of Genesis in ‘Leaving the Garden.’ Above all, Watts shows us that in this world whose beauty we too often don’t see, or dismiss, ‘The things of our world lead to love, / if we give them the chance…’ Holding this book in your hands is your first step into the joy of discovery Keats felt when he first looked into Chapman’s Homer.”—Gerald Barrax

“Companionable and comic, formally adept, these poems attain remarkable densities, provocations, and hard-won wisdom with a compelling voice that reveals, as well, mature tenderness regarding how ‘The things of our world lead to love,/if we give them the chance…’”—Scott Cairns

“What a deep and lasting pleasure to be found in this book! These poems trace the lineaments of desire to be found in this world, and a rueful letting-go of faith in the world to come. And yet everything here conspires toward a vision of something larger than the self, and serves as elegiac consolation even in its refusal to admit to sentience after death.  ‘Does he believe a wind will lift him up,’ one poem asks, ‘a rush of wings will gather something wholly him, a seed to rise another time, come some celestial spring?’ The answer for the poet is No, ‘I can’t imagine any life but this, rooted in common soil…’ but that common soil is abundant, and rewarding, and elicits Bob Watts’ praise and wit. Who else but this poet could liken the chitin husks of cicadas, the remains of a summer-long invasion, to scattered cars ‘left driverless and bumper-stickered in the wake of raptured saints’? Or describe french fries in terms of communion host? Or take Keats’s stanza form to make a new ode on a Poly-Grecian urn from Wal-Mart? The poems in Past Providence ring all the changes the title implies: one may be past belief in divine providence, yet still be responsible for conserving the abundance the world provides. To praise this world is to honor providence; this is an honorable book.”—Lynne McMahon

“The pages of Past Providence are filled to brimming with such spirit and grace and deeply registered experience that one is reminded again of Keats’s model for the making of a soul: a mind that has learned from the human heart (‘the Mind’s Bible’) the feel and fortunes of the world. By turns witty, touching, lyrical, and grand, this debut collection makes a powerful claim for the place of poetry in our everyday lives.”—Sherod Santos

Born and reared in the foothills of North Carolina, Bob Watts teaches at Lehigh University in Bethlehem, PA, on the edge of the Poconos.  His poems have appeared in Poetry, The Paris Review, and Southern Poetry Review, among other journals.  One of the founding co-editors of Center: A Journal of the Literary Arts, he holds the Creative Writing PhD in English from the University of Missouri-Columbia.