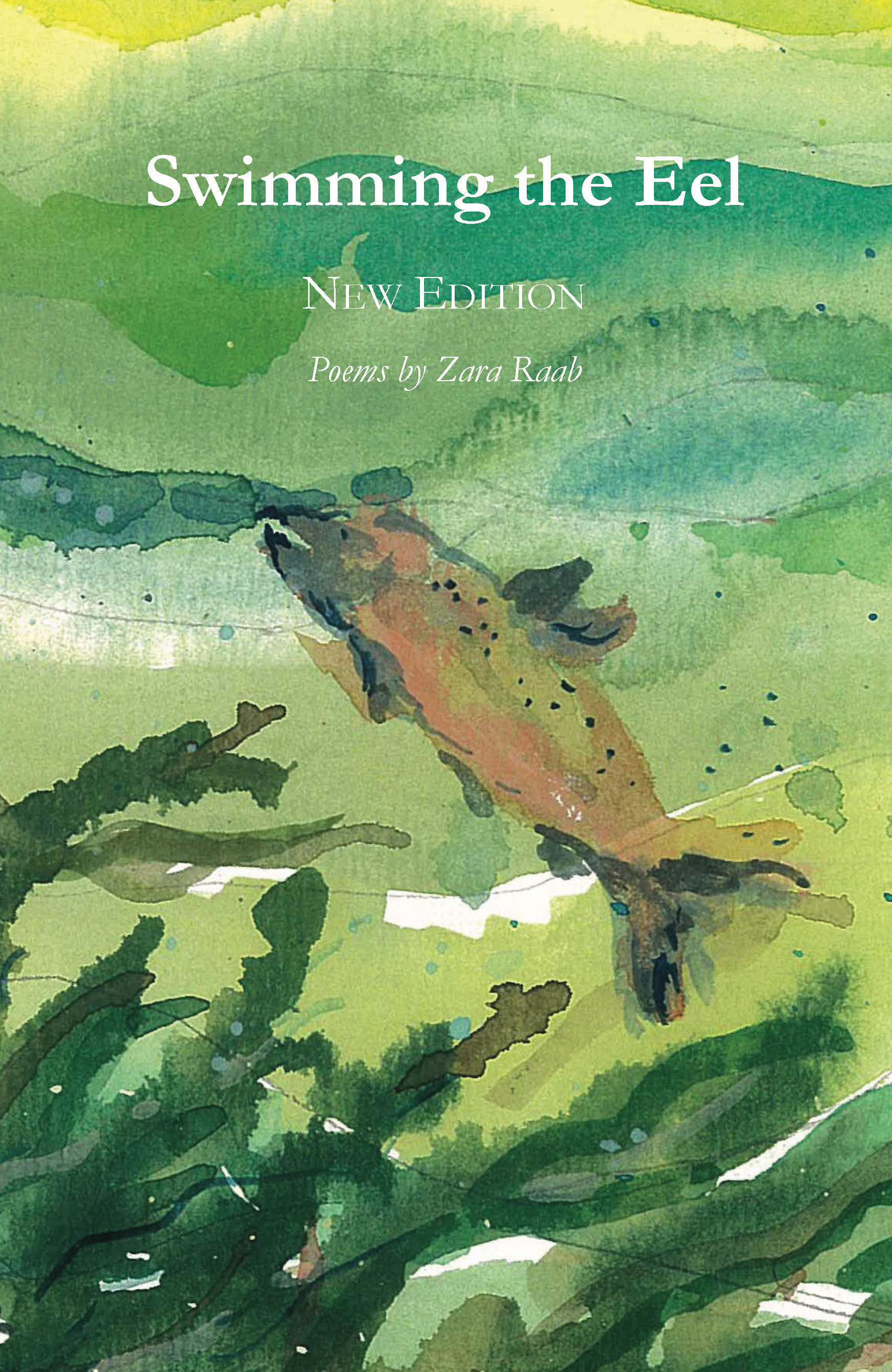 Zara Raab's poems evoke the rainy darkness of the remote northern California coast where family members settled inn the 19th Century, after a long haul in covered wagons across the continent. A few have since refused to budge. This is a second edition and combines the texts of Swimming the Eel and Fracas & Asylum.

"Zara Raab's poems set on the far North coast of California are permeated with a sense of place. It is as though she has not only a bird's eye view of wherever she is standing, but an equivalent gift for knowing where she stands in time; she sees every 'present location' within a larger context, both geographical and historical. A profusion of place names enter these poems- a river called the Eel, a mountain called Sanhedrin - as well as the names of people, and of peoples: the Wiyot, the Yurok, the Karuk and the Hupa. This namer -Emerson's definition of a poet-is forever asking whose lives inform the hills and streams around her; what difficult men and women, before her, found themselves and each other here? She fixes her attention on those who failed, like 'Billy Gawain,' a stranger to everyone, found hanging in the wood, nameless till those who buried him chiseled this one into his headstone. Gawain may not be the exception; he may be the very type of the people we've become, uprooted from the earth, 'his dirty boots a foot above the ground.' In another poem, 'Interstates,' she writes: 'The coursing, blinking lanes lead on, one to the next… Travelers become the stars… lost to others speeding through the dark… not knowing more than does a star, coming or going.'"-Alfred Nicol

"'Who'll join me...as the winter seance starts, wind rattling the pots?' Zara Raab's compelling dream of history, and the painful waking from it, merges inner life with outer world in these exhilarating lyrics of lost lifetimes in an outback corner of Northern California. A brew of wildness and domesticity, awakening the music of yearning and discovery, of landscape, wind, the 'infidels of light,' and 'cargoes of air.' Its pleasures are many, dislodging linear time, criss-crossing the buffalo clouds, dry arroyos, and haloes of dust with wagons and cars and private Cessnas, the life that 'at home in Eden, lay in wait for us, there, among the grasses.'"--Beverly Burch

"With this collection of poems, Zara Raab has combined her two earlier books, Swimming the Eel and Fracas & Asylum into a single volume that retains the fluency and verbal richness of her earlier books and clarifies their underlying vision. The mythic landscapes of her northern California childhood still resonate with dark beauty, while her themes have widened and opened outward to encompass, in language durable and fresh, the contradictions of our private and public lives. In her formal daring and thematic breadth, Raab bears witness to much that is broken and awry in the world and labors in her poetry toward restoration of wholeness."-Jean Nordhaus

Zara Raab grew up north of San Francisco to parents whose own great-grandparents settled in Northern California in the 1800s. She attended high school in Portland, and then Mills College in Oakland and graduate school at the University of Michigan. In Ann Arbor, she earned at Master's in philosophy, but continued to write and publish poems. She lived in Paris, and supported herself as a freelance writer in Washington, D.C. and later in San Francisco. In the early 1980's, she took the name Zara Raab, and once her children were raised, she began publishing poems and reviews in earnest. Her poems appear in Arts & Letters,Nimrod, The Dark Horse, River Styx,Crab Orchard Review, Think journal, The Hudson Review, and elsewhere. Her literary reviews and essays appear in many small magazines, includingRaven Chronicles, Poet Lore, Poetry Flash, and Colorado Review. Now a Powow River Poet, she lives in north of Boston.