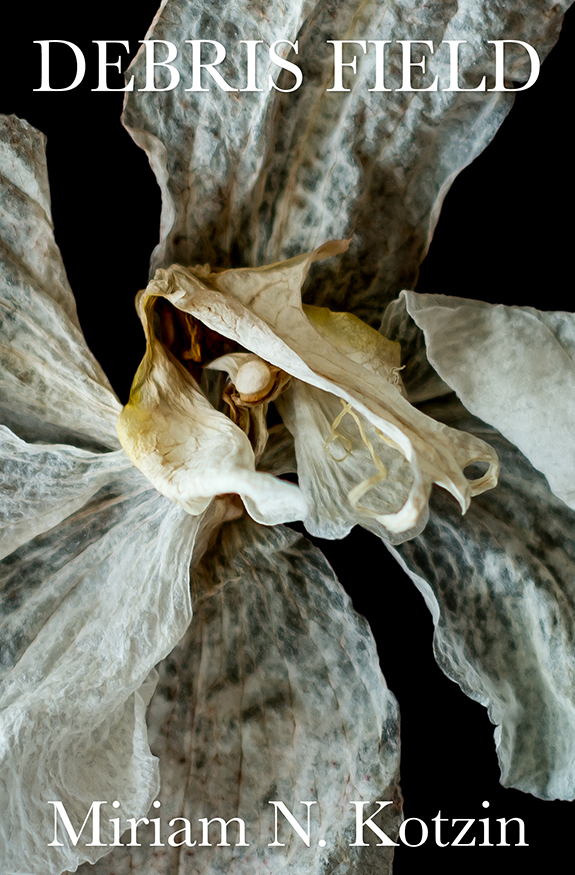 Debris Field marks Miriam Kotzin as a survivor, whose clear vision transforms the debris of the world into redemptive art.

"Miriam Kotzin is that rare contemporary poet whose clear-eyed view of the world is both dark and funny, sometimes uniquely funny. She is also deeply invested in the bitter beauties of the natural world from which she draws a number of her startling images. In Debris Field, she expands her singular journey that has made her one of the best poets of her generation."-Richard Burgin

"Poem after poem in Miriam Kotzin's new collection, Debris Field, stuns. Cancer and the Holocaust, pain and fear, ugly in themselves, here occasion breathtaking beauty. A finch, a pear, Elvis Presley(!), riddles and rhymes establish a lexicon of cleverest wit and finely drawn meaning. Moreover, the poems are masterfully orchestrated. You do not want to miss this book, which informs us that 'the dead are wandering around in the rain / again.' For the author, it is a true triumph; for the reader, it is both consolation and inspiration."-Kelly Cherry

"Miriam Kotzin astounds with the variety of forms and tones her poems take. Meter she treats as a friend and rhyme as a talisman. She revels in light verse with riddles and parodies, but the book begins with a punch to the gut about surviving Cancer, after 'a friend' can only whisper 'The Letter 'C.' Her searing Holocaust poem enjoins us to count the six million dead, and never stop counting, yet 'The Mockingbird Learns to Sing' proclaims: 'The plenitude of the world / seems an open songbook.' Kotzin sings to be heard aloud."-John Ridland

"Miriam Kotzin hasn't lost her touch or her ear -- she is still one of the best poets around, for which we are grateful, because many of these poems are about her struggle with cancer. It isn't easy to be lyrical about pain and fear, but she does it, 'Resetting' occasionally with pure song and wit."-Lewis Turco