The Moon from Every Window, Poems by Rob Griffith 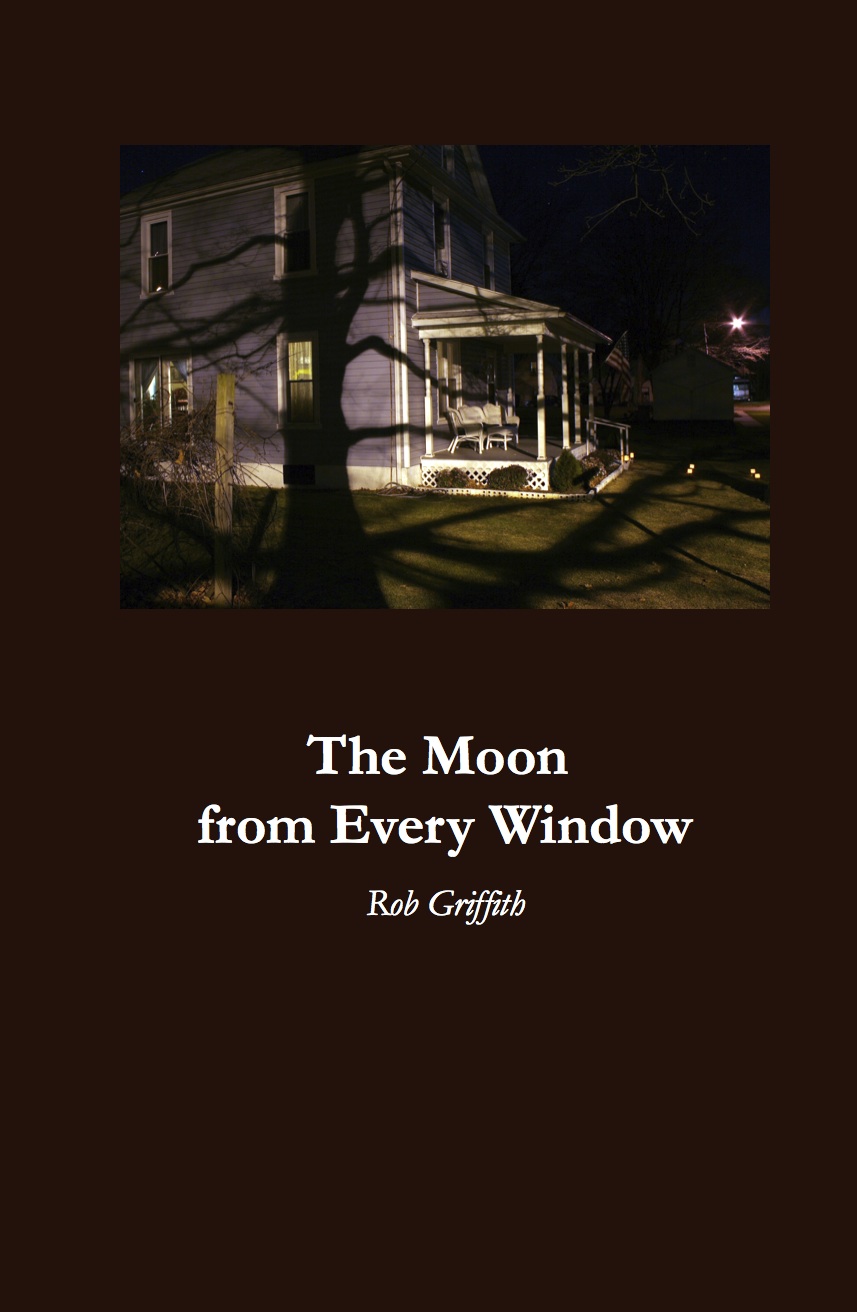 The graceful domestic scenes and fluid blank verse of Rob Griffiths The Moon from Every Window probe past their domestic limitations, finding the larger import that lurks in any scene.

The graceful domestic scenes and fluid blank verse of Rob Griffith’s The Moon from Every Window probe past their domestic limitations, finding the larger import that lurks in any scene.

“Rob Griffith’s new collection of poems, The Moon from Every Window, is a poised, polished, extraordinary book of formal dexterity and technical aplomb. And in these pages is the heartbreaking story of a couple on the rocks, elegant, windswept, and soulful. Read the last lines, if even only those. Read ’em and weep.”—Greg Williamson

“Rob Griffith’s previous collection, A Matinee in Plato’s Cave, established him as one of the most promising younger poets of our time. That promise now has been fulfilled — surpassed — with the appearance of The Moon from Every Window, poems evoking the quiet desperation of love. The melodic voice in many of these poems is one of emotional loneliness, of unfulfilled longing, of expectations disappointed due largely to the speaker’s misperception and inability to communicate his feelings to his loved ones. The unspoken desires betrayed in poems such as ‘Each Night,’ ‘Separating,’ ‘Leaving by Train,’ and ‘Empty House’from which the final, haunting line the collection’s title is taken—is to love and be loved. Yet there is a cautionary aspect to the speaker, who meditates upon the Uncertainty Principle in a moving sequence of ‘Heisenberg’ poems that reveals his intensely private nature, one marked by independence of spirit in need of solitude and the unsettling tendency to feel misunderstood and unappreciated by those he loves. Here is deeply moving poetry, mature and memorable, of a kind we have not seen since Auden. Rob Griffith must now be included in any discussion of the elite number of our best poets at work today.”—Samuel Maio

“I love how Rob Griffith finds the poetry in an everyday moment and renders it so precisely that it becomes radiant, a beacon to guide us along the waters of our lives. The Moon from Every Window contains a dog peeing on hydrangeas, a sexually fraught student-teacher conference, a hitchhiker in Tennessee, and a trip to the Memphis Zoo where bears sit ‘like mourners in a church, their great brown paws / still and flat across their knees.’ Yes, this is the world we inhabit—but when has it been seen so freshly? A master of form with a pitch-perfect ear, Griffith offers graceful blank verse, sonnets, and dramatic monologues that remind us of the fullness of the poetic tradition and how big and bold a collection can be when its author is conversant with the masters. Bravo.” —Beth Ann Fennelly

“Written in a wide variety of traditional poetic forms—blank verse, the sonnet, terza rima, quatrains, haiku, the villanelle—Rob Griffith’s poems come from a mind awake to some of the most profound mysteries of the human condition. The poems address the joys and troubles of family life, the beauty and violence of nature, the powers and limits of language (including metaphor), time and mutability and death, the domestic and the public worlds, the dramatic tension between different modes of knowing (the mathematical and abstract versus the everyday appearances of things), the ultimate meaning (if any) of human life, and, most movingly perhaps, the seemingly essential loneliness of each human being, a loneliness from which there may be respite, either with others or by oneself, in a room, a house, or on an island—or at least in the bleak consolation that perceiving the truth of things can bring. Griffith is so good at weaving these themes through images and conceptual statements that the reader loses himself in these well-crafted poems not through a Coleridgean ‘willing suspension of disbelief’ but through the conviction that, yes, this is the way life really is.”—David Middleton

“The Moon from Every Window is an amazing book. From sonnets to the zombie apocalypse, from a Chinese Doppelganger to the Heisenberg Principle, these poems take you everywhere with controlled, humorous lines. If ever you are bored with the world, read Griffith and let him make it new for you again.”—Alison Pelegrin

Rob Griffith is the author of the book A Matinee in Platos Cave (Water Press and Media, 2008), which won the 2009 Best Books of Indiana Award from the Indiana Center for the Book; and his work has appeared in magazines and journals such as Poetry, River Styx, The North American Review, The Sewanee Theological Review, PN Review, Prairie Schooner, The Oxford American, and others. He is the author of several chapbooks, including Necessary Alchemy (Middle Tennessee State University Press, 1999) and Poisoning Caesar (Finishing Line Press, 2004), and he is the Co-Editor of the poetry journal Measure and Associate Director of the University of Evansville Press, which manages the Richard Wilbur book award. He teaches in the Creative Writing Program at the University of Evansville, Indiana.