Winner of the 2003 Stanzas Prize: The Shadow I Dress In by Rhina P. Espaillat 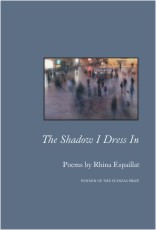 Rhina P. Espaillat's The Shadow I Dress In is the winner of the 2003 Stanzas Prize. Espaillat has emerged, late in her life, as a poet of sublime formal skill and an increasingly wide readership. She ranges widely in her tones, from colloquial to neoclassical, but always--seemingly without effort--finds the perfect balance between mind and music.

Rhina Espaillat is a native of the Dominican Republic but has lived in the U.S. since the age of seven. She publishes in English and Spanish and has four poetry collections in print: Lapsing to Grace (Bennett & Kitchel, 1992); Where Horizons Go (Truman State University Press, 1998), which won the T. S. Eliot Prize; Rehearsing Absence (University of Evansville Press, 2001), which won the Richard Wilbur Award; and Mundo y Palabra/The World and the Word (Oyster River Press, 2001), a bilingual chapbook. She has won the Howard Nemerov Award, the Sparrow Sonnet Prize, and prizes from the Poetry Society of America.  Espaillat lives in Newburyport, Massachusetts.

From Reviews of Rhina Espaillat's Work:

"Espaillat's poems have a way of speaking directly to each person listening: a rare gift. But she has many gifts: wit; ready intimacy; a natural understanding of the strange, the erratic, and the commonplace; the ability to translate those for others; keen vision into things, people, processes and events; a broad intellectual background upon which palimpsest her poems take form;and the kindness to share all these with others."--Alsop Review