Too Much Explanation Can Ruin a Man, Poems by Robert W. Crawford 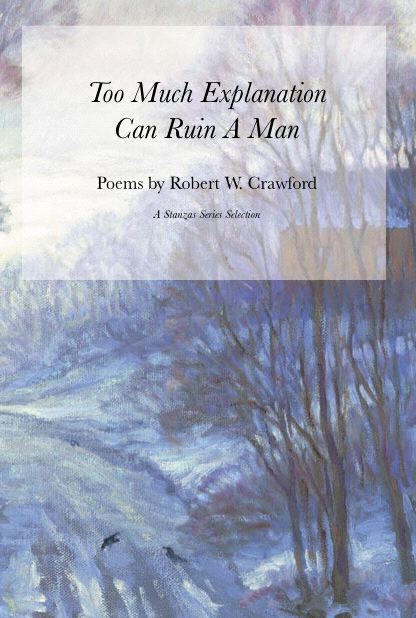 The Frostian touches of Too Much Explanation Can Ruin a Man by Robert W. Crawford are not found in the loping iambic cadences of the poems' speech, nor in the stoic figures who inhabit these terse narratives: they are found most profoundly in these poems' silences, what Frost asserted gets lost in translation: that which should not, or even could not, be explained.

“In quiet, subtle poems of unerring tact and delicacy, Robert Crawford explores relationships, aspects of nature and the seasons, landscapes (especially New England),  and—in Frost’s apposite phrase—‘our place among the infinities.’ He knows how to  engage in just the right amount of ‘explanation,’ and his exquisite craft never fails  him.”—Bruce Bennett

“In these gracefully formal poems, Robert Crawford has captured so much about  human experience that all of the first words that come to mind to describe them have  to be rejected as too limiting. Yes, they are richly ‘regional poems’ in the best sense;  yes, they are ‘love poems,’ and include some of the best examples of that timeless  genre that I’ve read in years; yes, they are ‘nature poems’ that convey the landscape  through close, precise observation, as when the poet notes ‘Odd oak leaves left to  crab across the snow.’But they’re so much more besides that they elude every label.  They include insightful character studies; taut narratives and revealing dialogues; elegies whose restraint creates a kind of unheard music; dark ruminations on the gaps  between desire and fulfillment; barbed humor; musings on science and history; witty  fantasies; delicately erotic, melancholy evocations of moments always felt to be passing—or passed. One brilliant combination of these, ‘Stranger by a Window, Waiting  for a Flight,’ takes the reader through a life lived—and dismissed—in an instant  of thought that has an unnerving resemblance to reality. Another, ‘French Braids,’  weaves a relationship by means of a single gesture miraculously described. This is  an elegant first collection to relish and return to often, for its subtlety, intelligence  and deft use of language, and for the questions it raises and leaves unanswered. It  makes me eager for a second book from Robert Crawford before too long.”—Rhina  P. Espaillat

“What Robert Crawford has composed is verbal music—in a day when literal lyricism  is rare in poetry. He floats his tunes over the sure rhythm of an underlying time signature, but above all he is a musician of words. Time and again, phrases made from the  simplest everyday speech startle the reader into an idea, an emotion, and—always—a  place.”—Deborah Warren

Robert W. Crawford was born in 1958 in Philadelphia, Pennsylvania. He graduated from Colby College in 1980 and earned an MA in National Security Policy Studies at The George Washington University in 1985. From 1983 to 1994 he worked in and around the Pentagon. In 1994, unwilling to commit to a life in the Washington suburbs, he moved back to New England and rediscovered his love of poetry. He now lives in Chester, New Hampshire where he directs the information technology department and teaches poetry at Chester College of New England. He is thankful that he can walk to work. Too Much Explanation Can Ruin a Man is his first book of poetry.