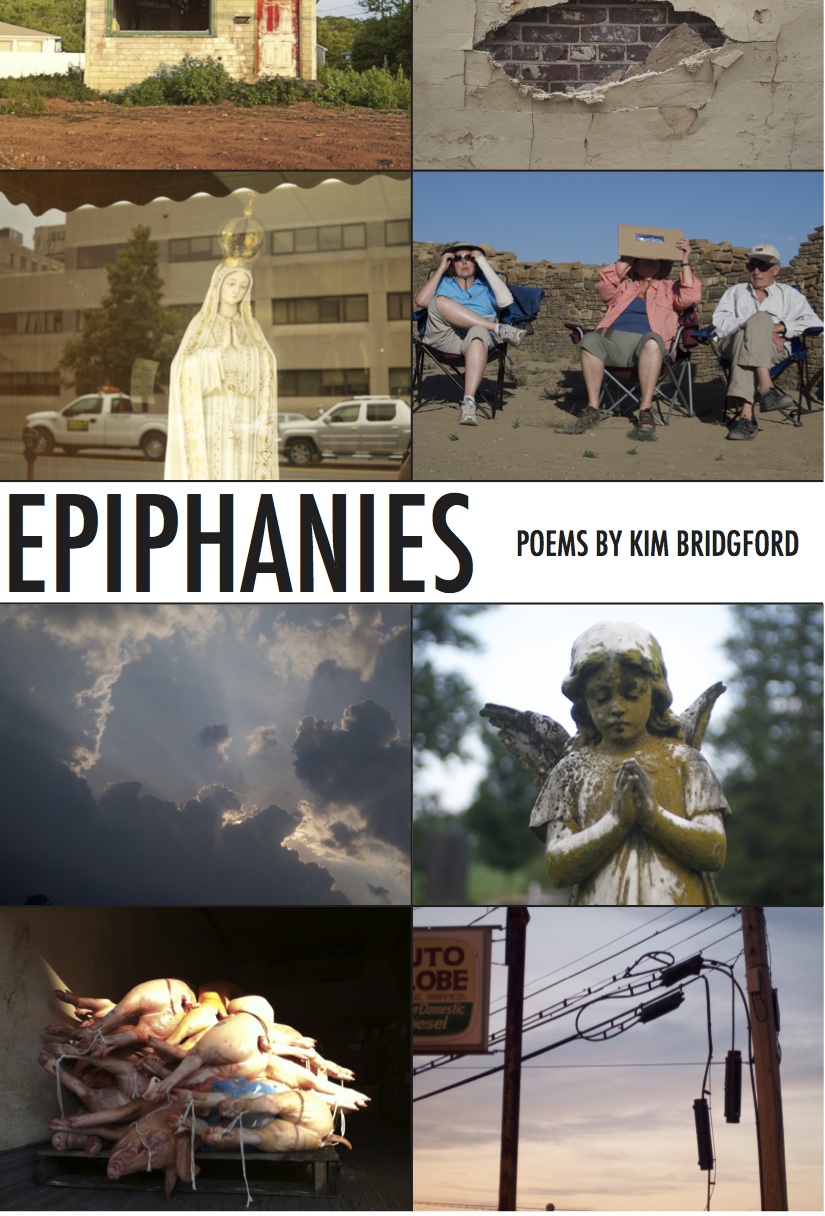 The poems of Kim Bridgford's Epiphanies are heart-breaking in their leap of faith, finding not just the divine in the human, but the human in the divine: "You'll rise again. I know what you've been through./I suffered human life: and so do you."

"In forty-two stunning sonnets Kim Bridgford covers the story of salvation from beginning to end. Bridgford appealingly complicates what would in less skilled hands be facile pictures of familiar Bible stories. She reveals the ambiguities, the slightly uncomfortable angle; she pushes beyond the surface, attempting to get under the skin of biblical figures we thought we already knew. Particularly memorable are the extended conversation of sonnets between Cain and Abel; Job's friends smiling secretly 'because that's what people do'; Joseph's love of Mary and his desire for her to tell the story of her unborn child over and over again; Lazarus pondering whether he was or was not before Christ called him back; and Jesus's final words: 'I suffered human life: and so do you.' Bridgford has done what Christian poets must do but do so rarely: revitalize the language and reinvigorate the Story."-- Jill Pelaez Baumgaertner

"Kim Bridgford's poetry is so clear-eyed it hurts---especially in these new poems, which demonstrate variety, prowess, and a subtle reshifting of old stories into fresh and unabashedly mortal forms. Maybe God's gaze is this steady. I'm no believer, but found myself hoping so as I wept my way through this graceful, devastating collection."--Terri Witek

Kim Bridgford is the director of the West Chester University Poetry Center and the West Chester University Poetry Conference, the largest all-poetry writing conference in the United States. As editor of Mezzo Cammin, she was the founder of The Mezzo Cammin Women Poets Timeline Project, which was launched at the National Museum of Women in the Arts in Washington on March 27, 2010, and will eventually be the largest database of women poets in the world. She is the author of numerous books of poetry, including Undone (David Robert Books); Instead of Maps (David Robert Books); In the Extreme: Sonnets about World Records (Story Line Press), winner of the Donald Justice Prize; Take-Out: Sonnets about Fortune Cookies (David Robert Books); Bully Pulpit (White Violet Press) and Hitchcock's Coffin: Sonnets about Classic Films (David Robert Books). Her work has been nominated for the Pulitzer Prize, the Poets' Prize, and seven times for a Pushcart Prize.

Bridgford has received grants from the National Endowment for the Arts and the Connecticut Commission on the Arts. Her work has appeared on The Writer's Almanac with Garrison Keillor, four times on Verse Daily, and has been honored by the Catholic Press Association of the United States and Canada. She has appeared in The New York Times, The Washington Post, The Philadelphia Inquirer, The Chronicle of Higher Education, and The Connecticut Post; on NPR and the website of The News Hour with Jim Lehrer; and in various headline news outlets.

She wrote the introduction to Russell Goings' The Children of Children Keep Coming, an epic griot song, and joined Goings in ringing the closing bell of the New York Stock Exchange when the book was released, a week before the first Obama inauguration.